A note on Equity and Climate

Or: Why PBOT's Alternatives Evaluation is Incredibly Misleading

If you took PBOT’s Paint and Pave Survey last fall—or looked at their Alternatives Evaluation recently—you may have noticed that they gave the alternative with protected bike lanes (“Alternative 3b”) their lowest possible score for Climate and Equity: 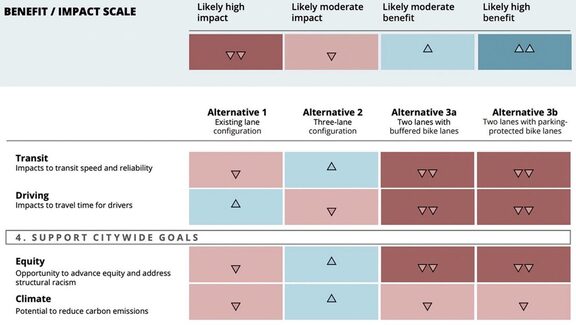 In September 2020, the Bicycle Advisory Committee posed a series of questions to PBOT's Pave and Paint team in order to answer these questions. In the Q&A (or if you read the Evaluations Report with a very keen eye), PBOT makes it crystal clear that their claims of protected bike lanes scoring poorly for Climate and Equity were based entirely on one thing: An 8-16 minute transit delay.

An assumption you might make is that this [projected] transit delay for Alternative 3b is a result of not having a center turn lane (included in Alternative 2 at the expense of safe bike infrastructure—the street isn't wide enough for both), which would allow drivers to turn left without making buses wait behind them.

But your assumption would be false. According to PBOT engineers, the turn lanes make no significant difference to transit travel times:

So what’s causing that 8-16 minute transit delay, if not the lack of a center turn lane?

PBOT engineers go on to reveal that their [projected] delay is caused entirely by their failure to consider a mixing zone at just one intersection:

Okay, so why don’t we build the protected bike lanes and simply add turn lanes for buses at Chavez to reduce delays?

PBOT says this is entirely possible, with the only tradeoff being that to make space for those turn lanes, the protected bike lanes would need to become mixing zones at the intersection. This is a mixing zone: 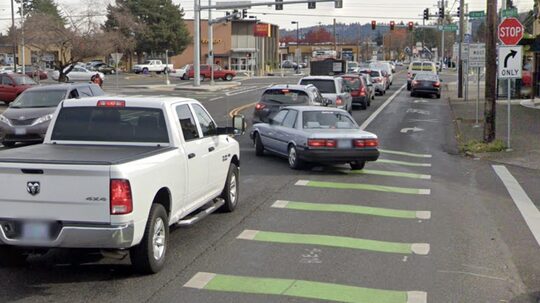 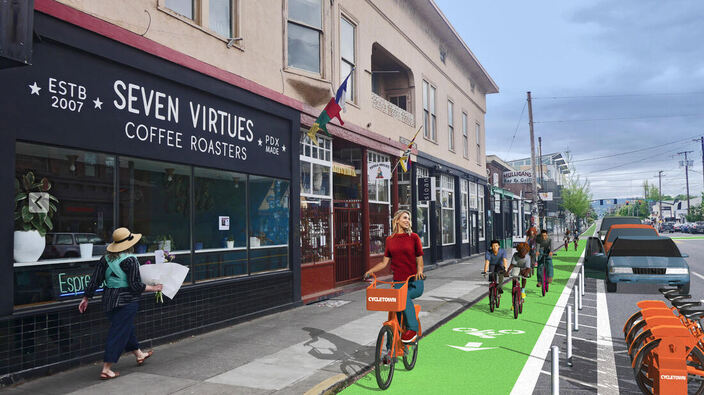 That one mixing zone at Cesar Chavez will allow for safe cycling and scootering on the rest of the corridor, improving pedestrian safety and increasing foot traffic, resulting in a huge boon to local businesses and a much more vibrant street for the community.